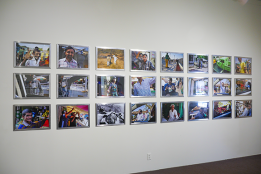 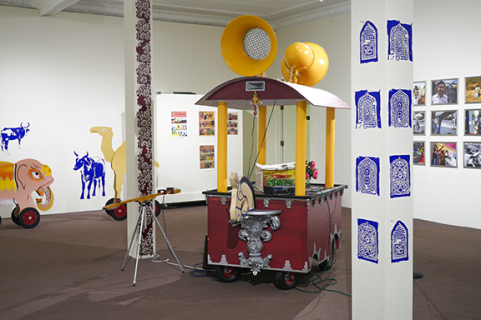 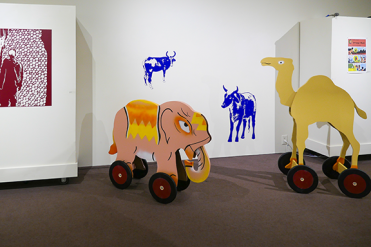 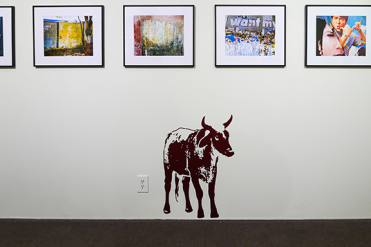 They Gave Us Directions

Jay encountered the vanishing craft of sign painting when we first visited India as a family in 2009. He developed images that he brought to the first sign painter he learned about in Baroda, Gujarat, where we lived. In 2014-15, he developed relationships with three sign painters who reside in the town of Baroda and commissioned each to complete paintings from the same set of images.

The series of photographs on the north wall are the photos for which the exhibition is named. When we took excursions outside of Baroda, our favorite driver, Shambu, had a gift for being lost. He frequently stopped to ask for directions. Jay, always ready with his camera, captured the gesticulations of the providers of the next direction.

The wedding band band cart is a central feature of the room, wired for sound, it anchors the spatial plan and is reminiscent of the vibrant street life of Gujarat.

The vinyl cuts come from a variety of sources. Cows are an omnipresent part of life in India. They roam the street. They provide a barrier from the oncoming traffic. No driver will hit a cow, a human is fair game. The allure of India’s great architectural monuments is acknowledged in the two figures standing before the Jali windows in Rajasthan; while the vinyl interpretations of textiles found in Cairo, Egypt in the form of tent hangings and other textile fragments organized on the pillars and the south and east wall pay tribute India’s preeminence in design and ocean trade.

Wheeled toys were one of the first devices that used wheels. In the gallery an elephant and camel occupy an area flanked by altered Mandrake comics and vinyl cuts.