Wendy Weiss and  Jay Kreimer presented the installation  Against the Sky at the Museum of Nebraska Art in Kearney in the Spring of 2012. The show featured 5 weavings by Weiss made with cotton, wool, monofilament, all dyed with locally sourced natural dye. Kreimer built 7 wood sculptures, as well as a crow on a stump and a Sandhill Crane, and a platform for the floor weaving. 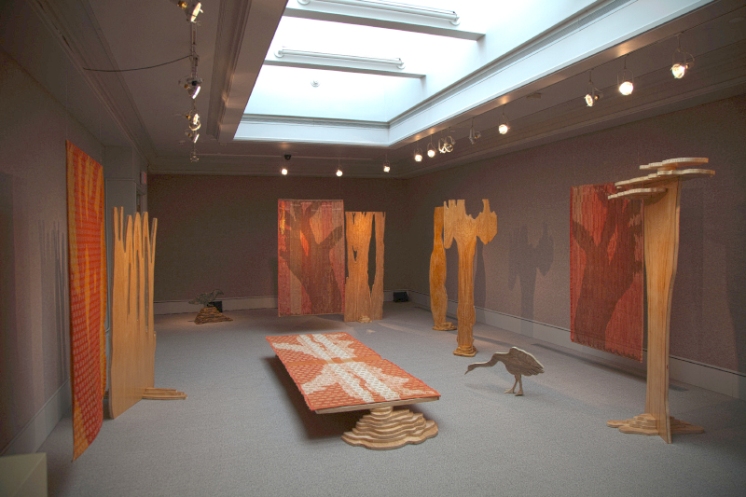 He also created a motion-triggered sound track that is composed of bird and wind sounds. The show was part of the “Nebraska Now” series and was on view until April 8, 2012. The Museum of Nebraska Art is located in downtown Kearney, a short distance from I-80.

Wendy Weiss weaves three dimensional spaces in which viewers interact. She collaborates with Jay Kreimer to create interactive sound environments, sculpture, and projected images. Natural dyes sourced directly from her garden are the primary coloring agent for the fibers, which are a combination of cellulose, such as cotton and linen; protein, primarily wool and silk; and nylon mono-filament (which dyes beautifully with natural dyes. View more posts